Gina Oakes is from Burlington, North Carolina and attended Appalachian State University.  In 2000 she started competing in Tri-Fitness and place 4th at the World Challenge in Clearwater Beach, Florida. In 2002 she competed and took home the 2nd place silver medal at the Tri-Fitness World Challenge in Las Vegas.  With perseverance and determination, Gina came back to Vegas in 2003 and won the World Challenge.   In addition, Gina has trained athletes in the North Carolina area to compete and challenge themselves in Tri-Fitness. 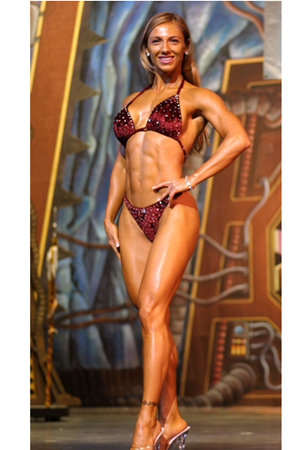 Doctor Mimi Zumwalt (sports  orthopaedic surgeon at Texas Tech in Lubbock,  Texas)  has overcome her share of obstacles.   This single mother of two was born in Vietnam and has served in the U.S Army during Operation Desert Storm.  Dr. Mimi’s first Tri-Fitness Challenge was the Western Championships in Brea, California where she place 3rd in Grace & Physique.   Mimi has challenged herself at more then 25 Tri-Fitness Challenges over the last 12 years!   Having first started competing in the 35-39 age group, she is now in the over 50 and going strong as not only a Tri-Fitness athlete but as the Tri-Fit Doc at all events.  She was featured in Natural Muscle Magazine in April 2013! Lovena, a former KC Chief cheerleader and physical therapist from Lawrence, Kansas started competing in Tri-Fitness in 2003.  That year, she won 1st place at the Eastern Challenge in Orlando, Florida and 3rd place at the World Challenge in Las Vegas.  In 2004, she placed in the top five at the World Challenge.  In 2008, Lovena place 2nd overall and 1st in the Fitness Routine at the Fall Challenge in Tampa.   During the last decade,  she has encouraged and trained athletes from Kansas to compete and challenge themselves in Tri-Fitness. Jenny Williams is from Dallas, Texas and started her Tri-Fitness career in 1999 as she prepared for her first World Challenge in 2000.  She place first place in Fitness Skills at Clearwater Beach.  After numerous titles in Dual Fitness and Dual Fitness Optional, Jenny place first at the 2006 Tri-Fitness World Challenge.   In 2008, Jenny repeated as the Overall Tri-Fitness World Champion.  As a personal trainer, Jenny has brought over 25 athletes to Tri-Fitness and  has formed Team Texas.  The future calls for her four daughter to follow in their mother’s footsteps. In 1997, Tiffany Vandemark challenged and encouraged Al Rosen to start a fitness event which would be fair and challenging to all athletes.  In 1998, the Tri-Fitness held it’s first event and it became a reality.  In 1999, Tiffany and her sister Melodi competed in the Tri-Fitness Battle By the Bay and Tiffany placed on the obstacle course.  The Battle By The Bay consisted of 10 different fitness skills and Tiffany won the 50 yard dash.  Over the last 16 years, Tiffany has judged and volunteered at many Tri-Fitness Challenges.  Being a huge Tri-Fitness supporter, she has brought together a relationship between Tri-Fitness and Chobani Greek Yogurt! Rodney and Al Rosen have had a friendship since 1988 when Rodney played quarterback for Coach Al Rosen.   When Tri-Fitness started in 1997, Rodney was there to help in anyway as well as compete.  At the present time, his time of 46.1 seconds still ranks in the top 10 all time for men.   Every year, Rodney is  there to help his former coach in anyway.  He has moved and set up the obstacle course in Las Vegas as well as St. Pete Beach and many places along the way.   He competed in the True Grit Challenge in November 2012. In November 2001, Ed and Marianne Johnston became official Tri-Fitness photographers.  They have covered more then 20 events from Las Vegas to Miami Beach and have always looked for the perfect shot.   They formed Split-Vision Photography and have done hundreds of photo shoots for fitness athletes.   They have provided approximately a quarter of a million images during the events.   Sports photography is not like doing a photo shoot as you have to be fast and agile thus Marianne has fallen off stages, into swimming pools, over weights  while Ed has been run over at the finish line by a diving athlete.   Despite the obstacles, they continue to provide athletes “extreme fitness